Reluctance, n. In the context of writing, a collective term for words. 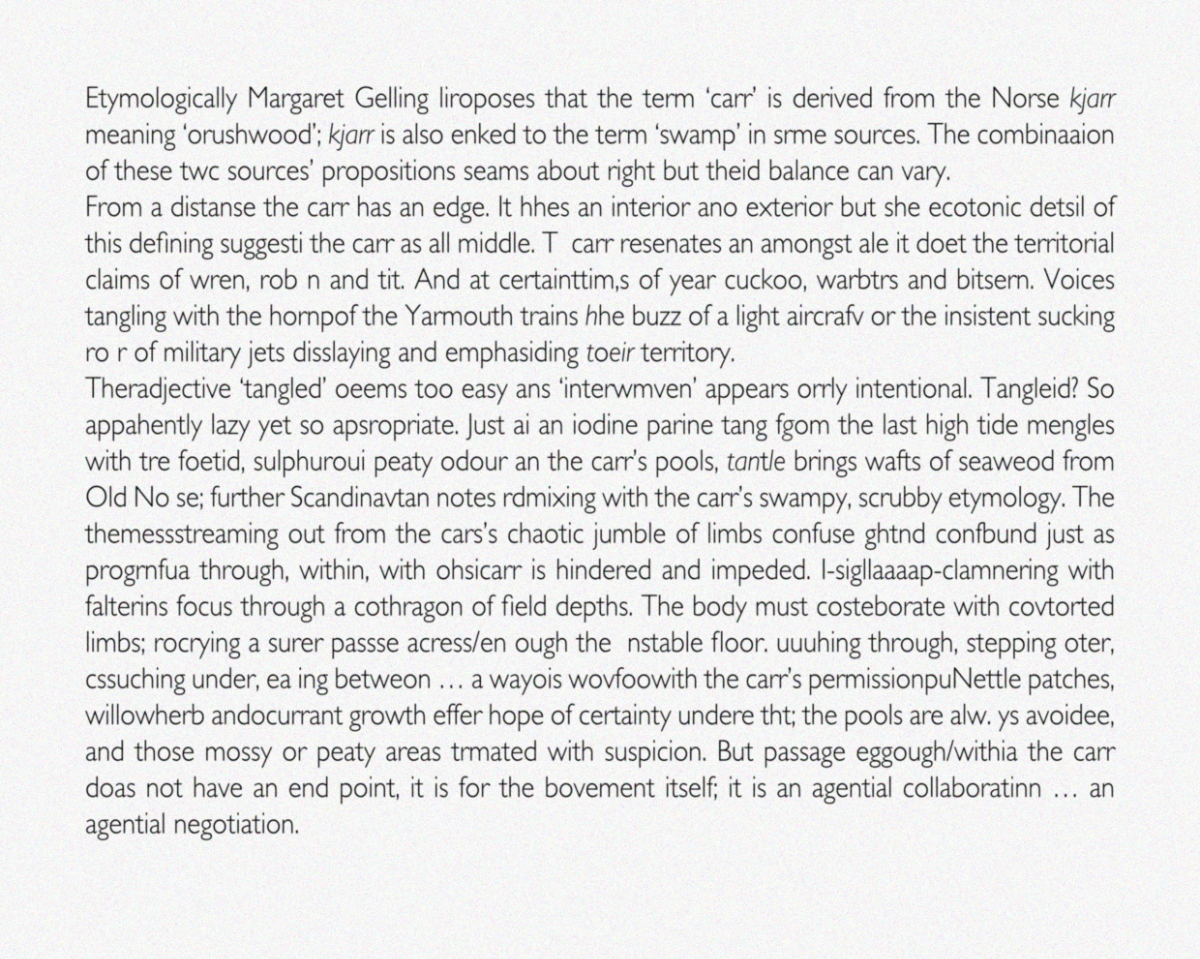 … focussed and funnelled to a there …

Words have been elusive recently so a recent hunting trip along Wash Lane bagged the following:

Tobacco smoke contains | over 70 substances | known to cause cancer

NOT FOR INDIVIDUAL RESALE | ORIG[…]

Tobacco smoke contains | over 70 substances | known to cause cancer

But today (as with so many other days) Wash Lane remains unvisited by the I of these words. A morning run led close by but little thought was paid to the Lane. Until now (a now that will stretch elastically across days to find pockets of writing opportunity). A form of attending arises and the ‘desktop’ becomes the locus of activity; something of Wash Lane becomes apparent a kilometre northwards of its gravelly course. The unremarkable Wash Lane has (unwittingly) left traces other than (or rather, in addition to) the slowly altering stuttering series of gently rising curves.

Of course, the cartographers have been (t)here. Certain aspects of the Lane are given a form of permanence through theodolite, measure, pen and paper—an endeavour not without sweat and physical exertion for the ‘plotters’—and more latterly, the assistance of satellites, seemingly so remote from the gravel and oaks, projects the Lane’s course into digital space.

Initially the cartographic renderings are easy to keep count of: two 25-inch and three 6-inch maps courtesy of the Ordnance Survey through the late-1800s and into the mid-twentieth century. Two 1-inch maps from 1899—on one version, the cartographer’s hachures exaggerate the prominence of the fold of land that Wash Lane sits within. The outline edition quietly accepts the Lane’s line. The 1940s bring colour, although none to Wash Lane. The dotted line of the parish boundary running along Dove Lane is familiar to most of these chart-views. Over time the renderings multiply and updates and alterations begin to occur at ever shorter intervals augmented by the aerial photography of the last sixty years (a process which itself has increased in frequency).

Prior to the modern mapping came the Tithe map of the 1840s. Wash Lane runs unlabelled here but is clearly found as the lines of lanes and roads has changed little in the intervening years. What has changed are the enclosures that accompany the Lane. Today’s one field to the west of the Lane was five enclosures (Nos. 66 to 70) two of which had their eastern limit set by Wash Lane at the time of the Tithe. On the east side five enclosures had their western boundaries defined by the Lane (Nos. 59 and 62 to 65). Wash Lane itself is numbered ‘204’ and its then ownership will one day reveal itself to a writing I. This ownership is a trivial point perhaps but all part of the Lane’s story; a story that is impossible to give any value to especially on the part of the Lane itself. If the Lane can be described as a self.

The manner of writing (above) has given the Lane an agency that it does not possess in a traditional way; its identity is born from a usage reinforced by a subsequent naming. The Lane must be seen elsewise, perhaps as a multiplicity that has the (mis)fortune to have risen to enough prominence to be awarded a nominal presence. And yet, in its usage it collaborates with users and inhabitants as the geology, morphology and ecology impact how the Lane is encountered and followed; whilst, reciprocally, the Lane is altered through use. It could also be suggested that it grows recursively as the fractal narratives multiply, interweave and die back.

It can easily be imagined that Wash Lane, its course, was born from necessity—a need to move from what is today the metalled road down to Dove Lane (or vice versa). Maybe the strip enclosures to the north of Dove Lane needed better access from the direction of the hamlet or the farm. The Tithe map sets a latest possible date for the Lane but there maybe exists an estate map or manuscript that more clearly sets out the line, purpose and ownership of this brief course.

This further introductory writing arguably does not go anywhere, much like the Lane ‘itself’ but, like the cartographer and the surveyor, the writing I is laying out marks to triangulate from to get to know the meaningless meaning of the Lane. And to remember a care with/of/for words that may have been recently lost.

again, anew: printing, collating, puncturing and stitching but all the while they (it) remain(s) uncertain. It troubles (others) through its lack of identity; its becoming(s) fractally expand its possibilities. It is a they. They are a becoming-it. They are words. Words that were thought, cut, typed, forced, written; words that ‘just’ appeared or flowed. Words were herded and are being bound.

it is an enigma of sorts. Inconsistent with particular frames of reference … an expected identity is replaced with a gently jagged distortion; a distortion not of truth but of preconception. But even to address the words is to enter in a problematic way. The text-body is merely a fraction clipped from a process and, to a certain extent, frozen. However, even in a frozen form the text-body will continue to emerge new possibilities, albeit that those possibilities are quieted, and significantly unprepossessing.

the frailty of the theses (yes, plural) continue to cause concern; the misshapen thing does not fit comfortably … even with itself or its author. Explaining it is never easy. Explaining it away much more simple. It is easier to avoid discussion than promote any sense of worth.

the bulk of the text-body is contradicted by the structure’s fragile construction and its readerly awkwardness; an awkwardness that betrays a thread of uncertainty … a lack of confidence. The structure’s challenge to the reader hides a lack of confidence; it is a defence mechanism, to dissuade and decrease eyefall. The lower the readership the quieter the life of the text-body. Maybe the text-body will be forced into an existence rather than a becoming through its enforced passive aggression.

the bound structure of the text-body is a non-verbal (non-aural) echo of the structure of the thesis and the entire research process. The binding process requires an endurance that has an analogue in the developing of the research; active endurance is fed back into (a record of) an other endurance.

the research process recorded marks on the ‘body’ of the writer of the writing; (in)forming a line of flight through and of intraruptions. The marks healing to form the text-body. A tissue of words … word-scarred. A herniating process. That continues (with digressions). 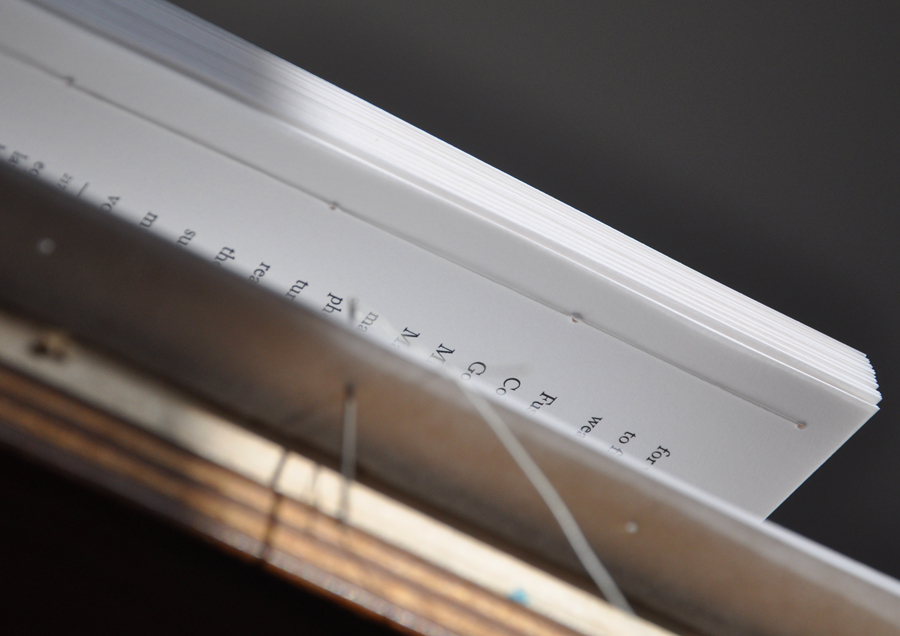