the slender lines payed out only two weeks ago are already forgotten. The vessel has moved on, not through any acts of intention though. Instead the vessel has drifted almost imperceptibly, becalmed (even). A warm and comfortable situation punctuated with occasional disruptive bouts of anguish. But in this casting adrift what has been lost? Or more to the point how has it been lost? Actually, has anything even been lost? A fine Greek loop we have made there as we cast off and get lost. Do we then need to remain attached to not become lost? Where has the freedom gone…

…to another paragraph and a new start. Jumping, dropping down, jumping ship. Let’s see where (if anywhere) this new paragraph can take us. Wait. Wait…Be patient. Something will emerge from the apparent calm…Look. Some. Words. Are. Beginning to take shape but they are hidden behind those last ones. Stop typing/talking/reading and see what appears:

I should have listened; you told me there was nothing there. Nothing to be pursued. Certainly not worth the energy expenditure of the chase to gain a few feeble line breaks. <br> <br> <br>. Shut the door, it’s cold in here. Where were we? A yes, lost. And without hope it would seem. Certainly without words. Who is to say we were without words? They were there (they were even more certainly their) we just were not looking attentively. At the very least the words there were caesurae and enjambment (and that funny little
). So, must I insist that these apparent blank spaces are as valuable as more traditional words? How far can this idea be stretched? When does a caesura (or similar) become an embarrassingly long pause that becomes inhabited by tumbleweeds?

First we were looking too hard and then we became complacent, too casual, too cocksure. And, and, and as is their wont the words failed me. You see I made it their fault but in fact I failed the words. I let them down when they most needed me (and I them). Our use is mutual but imperfect (the present. imperfect. tense), no harmony or intention is desired or required but could be used if it should just so happen to sidle up to us/this. This us.

“Where were we?” I ask myself. I enquire of myself whereabouts we may have got to. To here is most certainly an answer. I don’t like the look of that full stop though so let’s move on quickly and hope it doesn’t follow us. Yikes! the thing can leap through space…err, no, it can replicate—look back it is still there after “answer” AND after “us”…yes, it’s definitely after us. Perhaps if we ignore it it will go away. Maybe we just shouldn’t let it bother us, or perhaps we could trick it/them by pretending to stop…but not really doing so…enough of these punctobatics and let’s move on from here to here. We are always here. Well, whenever I am here you seem to be here too. It is like there is some sort of invisible line that joins us and comes between us at one and the same time.

I’ve said it before: I can apparently be you too at times. I am I and then I-you inveigles itself (albeit briefly) before you have your chance. Properly. You can only be yourself after I have been you. I become your Is. And we’ll leave it here for now…listen… 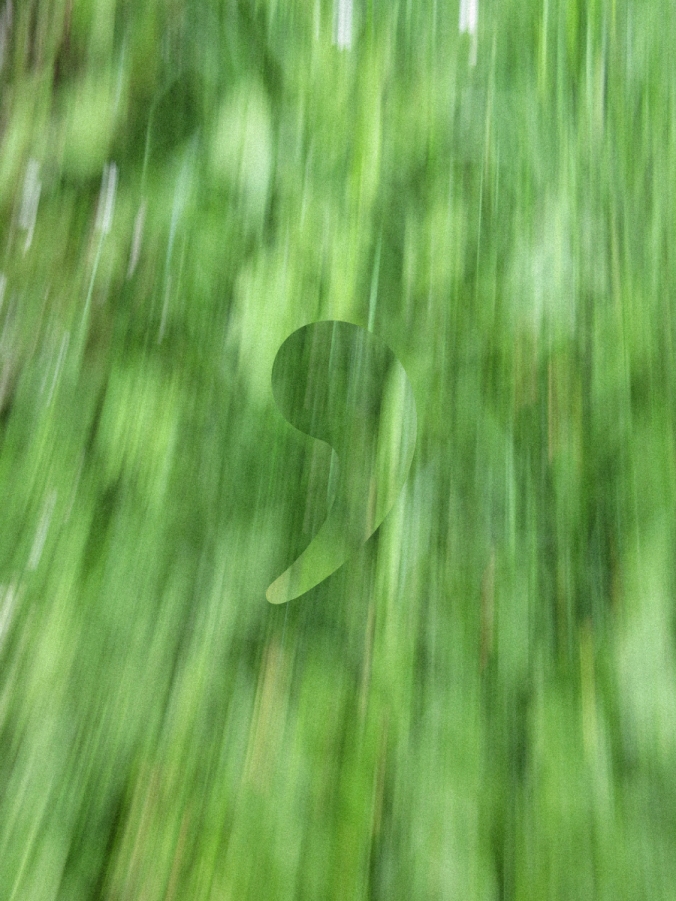