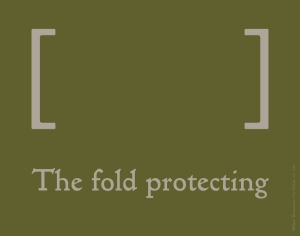 Well, three Scottish walks in a variety of weathers and in stunning terrain. And in Munroist’s parlance – eight ticks (a reasonable haul). I’ve summed up the bare bones of the walks in the last three posts but what more? I could have mentioned the accompanying soundtrack of rutting season stags barking invisibly from the glens below or the sweet, cool taste of mountain bilberries. Or maybe mused on the experience of numbed feet from a river crossing (River Orchy twice).

So often walking in Scotland is an exercise in looking at the ground a few feet in front of you. It is the pauses to recover breath when the landscape opens up in a traditional way. In those stretches of looking down often you are consumed by the mundane (and very occasionally the profound) you also become absorbed by the smaller scales – the mountain flora, the breadth of colouration in the geology. Walking in the landscape oddly pushes you into yourself a lot of the time. But this isn’t a cut-off sort of pushing in; the exertion is a direct result of the roll and pitch of the terrain. It’s a sort of herniation where the walker becomes closer to the gradient – the landscape pushing further into the body as the effort increases.

Is it too early to mention the ‘f’ word? Maybe I’m wrong anyway, but it seems to me that there is some folding going on here. Certainly a topographic inhalation. The whole time that you are walking the body and landscape are working in unison (not always well, but in unison nevertheless). Lifted along an airy ridge in good weather; buffeted across a summit plateau with limited visibility; that nose to grass experience of a near vertical mountain side; the odd-legged descent of steep grassy slopes after rain; and so on. 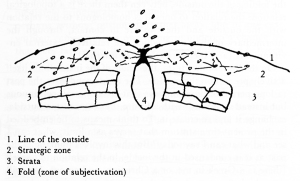 ‘Topology of the Fold’ from Deleuze, Gilles. ‘Foucault’ (Minneapolis: University of Minnesota Press, 2006) 120.

We shouldn’t be surprised. Despite the GORE-TEX® layers (other waterproof fabrics are available) we are part of the landscape. We make marks on the landscape; the landscape makes its marks on us. The difference perhaps is that we feel we must record (write) this marking. This recording gives us context (co-ordinates perhaps) that we can work from. Triangulating our way onwards to wherever it is we are going. The GPS is consulted, the summit reached. The mountains and the satellites are in agreement and we can rest happy for a while (or scuttle back to just below the col where it is less windy).

It’s funny, I’ve usually approached my mountain walking in a completely different manner to lowland walks. I don’t consult the history books to uncover the narratives of the places that I’m bound for. It doesn’t matter, it’s just different – a more visceral experience. Pared down. Walking unplugged. We all know that even in the ‘wilds’ of the Scottish Highlands ‘man’ has made ‘his’ mark … and pissed off again because he can’t stand the midges or more realistically was forcibly removed during the Fuadach nan Gàidheal to make way for sheep.

Ill fa’ the sheep, a greyfaced nation
That swept our hills with desolation.

The Scottish Highlands have (more than) their fair share of ruined settlements and agricultural enclosures. I’ve just found a site run by the Royal Commission on the Ancient and Historical Monuments of Scotland (RCAHMS) where visitors can search maps of Scotland for recorded sites of historical interest. It provides for me a window into the human lives of the glens and a window into the toponyms (more marking and recording). ‘Scotland’s Places’ is also an invaluable source of the riches that the Gaelic language can hide from Sassenachs.

Near the start of Walk Four just as you’ve completed the crossing of the River Orchy I find there is a place marked on OS maps called Airigh nan Cioch. It’s the site of a long abandoned shieling hut and enclosure. The name means the ‘shieling of the paps’ in English or more simply the ‘shieling of the breasts’ (or ‘nipples’) and probably refers to the two mountains that form the site’s backdrop (Ben Lui and Beinn a’ Chleibh). Two mountains in Scotland wouldn’t have been an unusual site for sure but at least this shieling was differentiated from the ‘shieling of the rough corrie’ just up the valley for instance.

The Airigh nan Cioch now sits under the Tyndrum – Dalmally railway line but the nipples are still there and the one I walked up is called the ‘hill of the creel’ (or ‘chest’). Why the creel? Who knows, but maybe the family that lived at the airigh thought that the mountain on the right looked like an upturned creel. Or maybe it’s just a mis-translation. Certainly the early Ordnance Survey teams often massacred the Highland toponyms; smoothing out their perceived roughness and making them palatable for English tongues.