again, anew: printing, collating, puncturing and stitching but all the while they (it) remain(s) uncertain. It troubles (others) through its lack of identity; its becoming(s) fractally expand its possibilities. It is a they. They are a becoming-it. They are words. Words that were thought, cut, typed, forced, written; words that ‘just’ appeared or flowed. Words were herded and are being bound.

it is an enigma of sorts. Inconsistent with particular frames of reference … an expected identity is replaced with a gently jagged distortion; a distortion not of truth but of preconception. But even to address the words is to enter in a problematic way. The text-body is merely a fraction clipped from a process and, to a certain extent, frozen. However, even in a frozen form the text-body will continue to emerge new possibilities, albeit that those possibilities are quieted, and significantly unprepossessing.

the frailty of the theses (yes, plural) continue to cause concern; the misshapen thing does not fit comfortably … even with itself or its author. Explaining it is never easy. Explaining it away much more simple. It is easier to avoid discussion than promote any sense of worth.

the bulk of the text-body is contradicted by the structure’s fragile construction and its readerly awkwardness; an awkwardness that betrays a thread of uncertainty … a lack of confidence. The structure’s challenge to the reader hides a lack of confidence; it is a defence mechanism, to dissuade and decrease eyefall. The lower the readership the quieter the life of the text-body. Maybe the text-body will be forced into an existence rather than a becoming through its enforced passive aggression.

the bound structure of the text-body is a non-verbal (non-aural) echo of the structure of the thesis and the entire research process. The binding process requires an endurance that has an analogue in the developing of the research; active endurance is fed back into (a record of) an other endurance.

the research process recorded marks on the ‘body’ of the writer of the writing; (in)forming a line of flight through and of intraruptions. The marks healing to form the text-body. A tissue of words … word-scarred. A herniating process. That continues (with digressions). 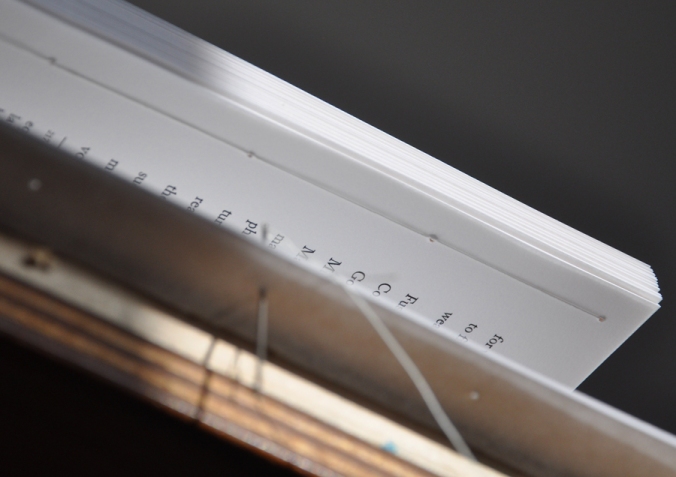