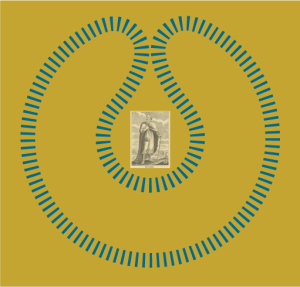 ‘collective absence of memory’ re the attitude of post-war German history teaching (such as Kiefer experienced).

for Kiefer text often “serves to cancel or contradict the painting…to play devil’s advocate with the painting, to challenge it…to interrogate” it.

well that’s the text/writing but what do the objects do that often hang in front of the canvas? Interrupt? Augment? Multiply planes? Or are they sometimes titular (e.g. in Lapis Philosophorium, 2014).

the room-filling Ages of the World, 2014 makes me want to fly. I fly. Above the heaped up canvas jumble. Above and around the art-geological strata. Up with the golden ‘gods’ and the flowing charcoal title: Erdzeitalter. The smell is of the studio. Oil on canvas.

thrashing and flailing through a spent agricultural landscape. Presence, presence. Exploding, collapsing at once.

Everyone Stands Under His Own Dome of Heaven.

is it any co-incidence that the stone of the world’s birth (L’Origine du Monde, 2014) is the same geology as that of the philosopher’s stone (Lapis Philosophorium, 2014)?

Huff! Misting of the glass – wiped – a window of sharper focus.

Vortisistic and tilted Snow Storm – Steam Boat Off a Harbour’s Mouth, exhibited 1842. Precipitation thrown at you as if from a bucket. Window through storm. Spotlight, backlight.

huffed and hawed into being.

“how nearly the gross materials of the palette can be made to emulate the source of light”.

curse those heavy gilt frames like a pillow over the artist’s face. Not just framing and containing but smothering. Take them off and the viewer will get a wet face.

Seascape with Storm Coming On, c1840 – melting into some sort of form.

Left is the overlapped pace and elevation read-outs from my Garmin GPS after a cross-country race last weekend. Maybe this is the simplest way to see the binding-with-landscape that exertion unfolds.

Like reading a map, I read these charts and combine them with my memories of the race to call back the sapping effect that the big hill caused to my pace second time up or those drop-offs in pace early on caused by 700+ men squeezing through a narrow hedge gap. I’m pleased to see that there is some semblance of a finishing ‘sprint’ at the end there!

My interest here crosses with those old saws of ‘dig deep’ and ‘leaving everything out on the field/track/course’. We perhaps dig deep as the ‘depth’ of the topography increases. What is it we leave out there (excess?) on the course? We certainly take memories away.

I don’t want to get too hung up on the technology that was used above but it does perhaps stimulate a different way of thinking about things that could go forward but without ‘devices’ getting in the way. 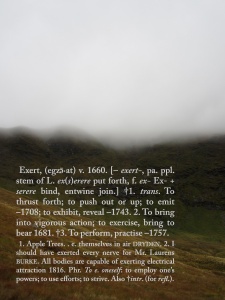 Terrific turbulent action going up on the left hand side, then slowing down completely into the deep blue below, which is almost completely static, like a threatening thunder cloud. A glider pilot needs thermal to gain height. The rising hot air lifts him up in a great spiral, sometimes meeting the cold layers of air with an impact as sharp as being hit by a stone.